I’ve just posted my latest presentation on opportunities that are starting arise for brands as we move from Web2.0 to Web3.0. OK, I know that “Web3.0” is a “contentious marketing term,” but seems to work for the time being until someone comes up with something better.

In a nutshell Web3.0 could simply mean “the Web knowing what I mean.” For instance if I say, “I want a 2-bedroom near the beach for $2500,” here’s what Google gives me: 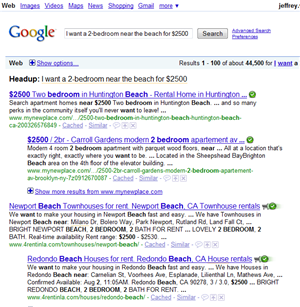 Not bad, except I am nowhere near California or New York! The trick is knowing the “context;” where I am (“location”) and what I think is “near” (what I call “correctness”) and the “channel” (am I out on my mobile device?)

All this is difficult to say the least and startups like Primal Fusion, Siri and Twine are trying to solve the front end piece and slowly but surely web technologies and standards are being put in place to help structure the underlying data (or make relationships more relevant.)

For those brands that can understand the challenges and opportunities, there will be new leaders created in this next wave.

There is a great post on the Ponoko blog, that talks about a disruptive shift in the way consumers will represent everything from maps to parts. Its called 3D printing and could be as important a change in the way we think about form as the shift from dot-matrix printers (remember those?) to laser printers.

The reason is because a company called Desktop Factory has dropped the price of the individual units to below $5000. While not exactly a staple on everyones Christmas list, they have gotten to the range that the Apple LaserWriter was in about 1985. I remember using one of these around that time and apart from the outrageous price per page (I was using it in school or at Kinkos) I knew after I saw the output that there was no going back to dot-matrix. It was like seeing a movie in colour, then again in black and white; there was no comparison.

Although dot-matrix printers continued to improve in quality and speed, the flexibility of laser printing quickly changed the way that people thought about putting graphics and text on the page. In theory consumers were able to compete with publishers with the availability of these new tools. But the reality was not quite as profound.

What I remember was that there were quite a few newsletters, posters etc. that looked like they had been assembled from a whole bunch of different sources and thrown down on paper. (Which reminds me of what is currently happening with interactive applications and Web 2.0, but that’s a whole other post.) What struck me at the time was that there still needed to be some design involved to make sense not only of the detail but of the overall picture.

You could see this about a decade later when the first html pages were created. (Anyone remember rainbow lines and scrolling status bar text?) Even though the palette of choices and tools was limited, those skilled web designers could make great looking pages even in those early days.

(An interesting sideline to this discussion, RepRap makes a printer that (although not as esthetically nice as other commercially available machines) has successfully replicated (or cloned) itself by making its parts. Available under GNU, there are documents online so you can make one yourself.)